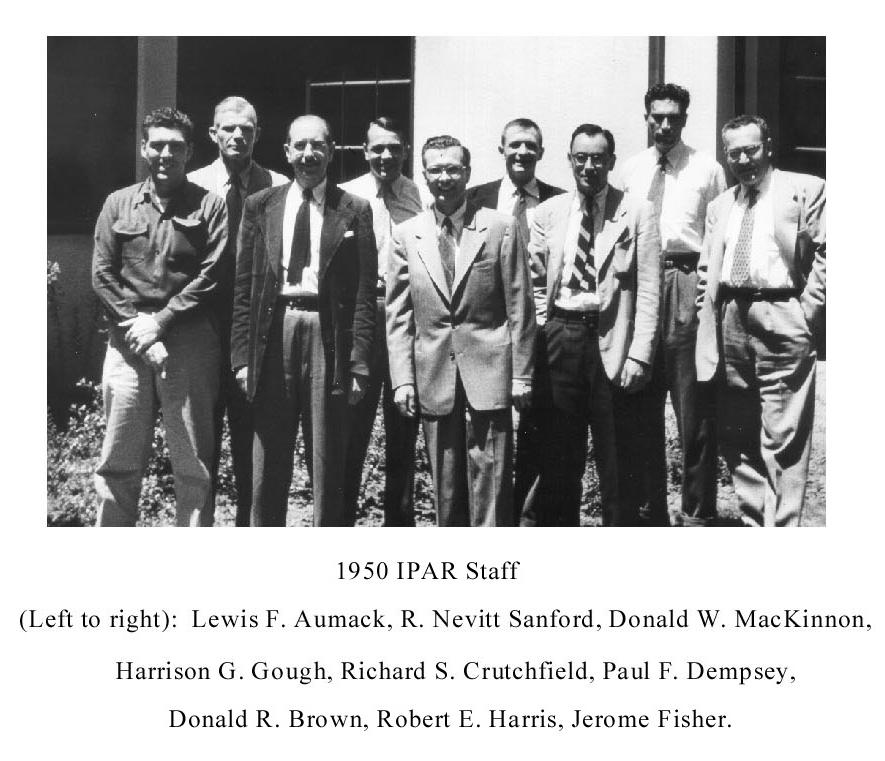 IPSR was founded in 1949 under Director Donald W. MacKinnon and Associate Director Nevitt Sanford. At that time IPSR was called IPAR: the Institute of Personality Assessment and Research. The Institute's roots can be traced back to Henry Murray's Psychological Clinic at Harvard in the 1930s (where both MacKinnon and Sanford had been trained) and to the Office of Strategic Services (OSS) personnel assessment centers that were established during World War II (MacKinnon directed one of these centers). Subsequent Directors of IPSR include: Richard S. Crutchfield, Harrison G. Gough, Kenneth H. Craik, Philip Tetlock, and Robert W. Levenson as well as several interim directors. Currently Dana R. Carney is the Director. The goal of the Institute was to apply personality assessment to the study of fundamental theoretical and substantive issues in psychology and human behavior.

From its inception, the Institute was a home for visiting and resident scholars and a center for research. Early studies conducted at the Institute addressed topics such as professional promise and high-level performance, aesthetics and creativity, personal soundness, adult development, life histories, and leadership. In addition to illuminating the theoretical and empirical issues in each of these areas, this research led to the development of new measures and procedures for assessing the similarities and differences among individuals.

One of the defining features of IPSR's work has been the view that, to understand personality fully, you must view the individual in a number of different situations. In the original IPAR studies of personality, this was accomplished through intensive multi-day assessments, which included administration of extensive self-report inventories; procedures that enabled careful observation of behavior in structured and unstructured situations; and detailed in-depth interviews.

Over time, the Institute's focus expanded. New projects were launched that studied environmental psychology, art and psychology, culture, development of personality, psychobiographical case studies, and creativity. Cooperative endeavors with foreign research centers were undertaken that involved exchanging scholars in a variety of fields. As part of the international focus, efforts were undertaken to translate a number of personality inventories that had been developed at the Institute into other languages.

In 1992, the Institute expanded again to include the study of social processes, a natural extension given that individual differences are primarily expressed in and gain meaning from social contexts. Reflecting this change, the Institute changed its name to the Institute of Personality and Social Research (IPSR). This expansion has attracted new programs, new energies, and new members to the Institute.